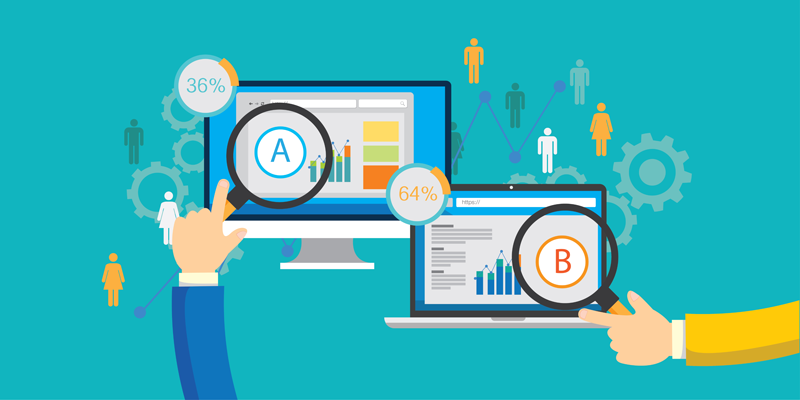 Emails are an integral part of modern marketing. However, so many brands waste time sending emails that don’t work. To avoid this, you need to make use of A/B testing. This will help you to test what message resonates with your audience, what campaign works best and what CTA generates the most clicks.

An A/B test is an experiment for determining which variation of something works better. For instance, you may compare two similar emails, with the only difference being a change of subject line. You would send both emails and then analyse the results to determine which generates better results. A/B testing shows the efficiency of potential tweaks and allows data-driven decisions.

So, what’s the benefit of A/B testing emails? If you’ve never heard of A/B testing before, don’t panic. We’ll explain everything you need to know here in this guide.

What is A/B Testing?

Also known as split testing, A/B testing allows you to compare two versions of the same piece of content. The test can be used on everything from paid search ads, website copy, and of course marketing emails.

When it comes to A/B email testing, the test allows you to tweak part of the email to test which version works best. You can then analyse the results and see which generates more clicks, opens and conversions. For instance, does a brightly coloured button increase clicks? Does using an emoji in the subject line increase opens?

A/B testing varies from simple to advanced. Simple split testing includes one or two elements which are easy to tweak, like the button colour and subject line. More complex testing includes the customisation of many elements in your campaign like overall messaging, image placements, personalisation or different email templates.

What are the Benefits of A/B Testing Emails?

Split testing determines the best content to encourage purchases and sign-ups. After testing your emails, you’ll know what works and what doesn’t and convert more leads. To increase conversion rates, create two identical emails for the A/B testing process and then tweak one slightly. The one that generates better results will provide increased conversion rates.

You can also use A/B testing to test email copy. When doing this, you’ll need a list of potential improvements to show users. The process of considering, creating and evaluating the content options will result in improved content that resonates with your audience. Ineffective content will be whittled out during the process, leaving you with strong pieces of writing that generate results.

Use on Multiple Emails

Sometimes, the findings from A/B testing can be applied to additional emails. For instance, if an emoji in the subject line increased clicks for one email, it will probably do the same for something similar. This allows you to create a number of successful emails from one simple A/B test.

Determining a winner and a loser of a split test is easy: simply see which option generates better results. In the past, A/B testing results were raw numbers and you’d need to interpret them to determine a winner. Today, there are services with stat engines to make the decision for you. With split testing services now including statistical analysis for users of all abilities, the data for comparison of two options is straightforward. This means that anyone can use A/B testing fairly painlessly – even those without prior knowledge of the process.

Even a small sample size in an A/B test can provide actionable results about which changes are most effective. This allows you to test a number of emails in short succession.

Subject line, images and buttons are typical elements for A/B testing, but any part of the email can be updated and tested. Headline, CTA, and content can all affect conversion rates and user engagement in ways you won’t know without testing. Through simple A/B testing, you can determine exactly what works and what doesn’t.

By split testing, commitments to expensive and time-intensive changes can be avoided. Any major decision can be well-informed, and you can avoid mistakes that could otherwise use unnecessary cash and resources. The easiest way to use A/B testing to reduce risk is to rule something out. If you see that making a tweak could decrease conversions, don’t go ahead with it.

All of the benefits mentioned above serve to increase sales volume. Beyond the initial boost that optimised changes provide, split testing produces better user experience, which, in turn, builds trust in a brand and created loyal repeat customers and increased sales.

So, there you have it – the benefit of A/B testing emails. Now you know everything you need to split test your email campaign: the practice process, the elements you should focus on and exactly how it can benefit your brand. Not only is A/B testing inexpensive, but it can also save you money later down the line. The process will help you to avoid wasting time and money on ineffective emails and allow you to pour your budget into something that really works. Better still, it’s super easy to carry out. All you need is a few email options to compare and a way to analyse the results.

The Difference Between a Local and National Marketing Strategy